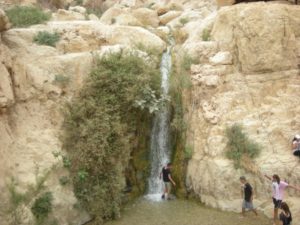 Visit En Gedi – En Gedi is an tranquil oasis located West of the Dead Sea and near to Masada and the caves of Qumran where the Dead Sea Scrolls were discovered.

The Song of Songs speaks of the vineyards of En Gedi in the Bible and the town of En Gedi was an important source of Balsam for the Greek Roman world.

A visit to the mosaic remains and the two waterfall / springs are a must for the bidding archaeological activists among you.  It was in the caves of this area where David and Saul had their encounter, where David cut off part of Saul’s robe to show he could have killed him.

The En Gedi nature reserve is a sanctuary for many types of birds, plants and animal species and is one of the most important reserves in Israel.

Situated on the Eastern Border of the Judean Desert and the Dead Sea Coast, En Gedi is a perfect add-on location to visit when touring the Southern area of the Holy Land.

Tips and advice for your Holy Land Tour

Tip 1: The temperatures in the area of En Gedi can at times become very, very hot. Be sure to pack sun cream, a sun hat and plenty of water.

Tip 2: Not far from En Gedi is the Ahava Spa and factory outlet. Include a visit there to purchase Dead Sea products at reduced prices.

Tip 3: Another site to include in your tour of the Holy Land quite near to En Gedi is the Ascent of Akrabim. An ancient road dating back to the time of Moses and very likely a place where Moses would have wander for 40 years with the 40 thousand. The view from the top of the Ascent is breath-taking and shows the true extent of the situation Moses faced.

This website uses cookies to improve your experience while you navigate through the website. Out of these, the cookies that are categorized as necessary are stored on your browser as they are essential for the working of basic functionalities of the website. We also use third-party cookies that help us analyze and understand how you use this website. These cookies will be stored in your browser only with your consent. You also have the option to opt-out of these cookies. But opting out of some of these cookies may affect your browsing experience.
Necessary Always Enabled
Necessary cookies are absolutely essential for the website to function properly. This category only includes cookies that ensures basic functionalities and security features of the website. These cookies do not store any personal information.
Non-necessary
Any cookies that may not be particularly necessary for the website to function and is used specifically to collect user personal data via analytics, ads, other embedded contents are termed as non-necessary cookies. It is mandatory to procure user consent prior to running these cookies on your website.
SAVE & ACCEPT